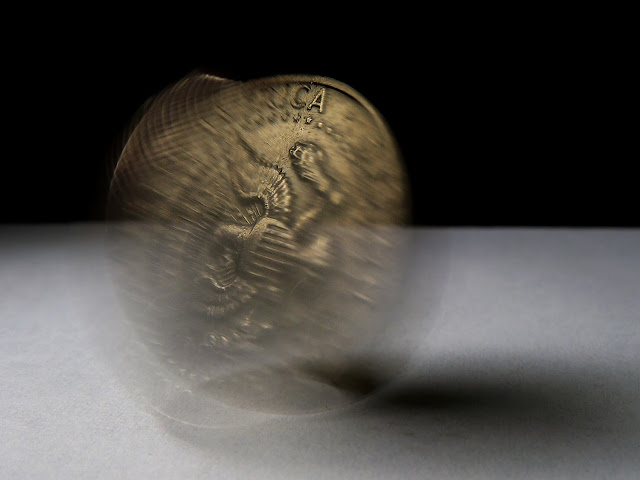 Daily assignment for photo club. US half-dollar coin. Would have liked an image of the head in this position (JFK), but that would take another 100 attempts to get it right...
Posted by Michael Gatton at 8:51 AM 6 comments: 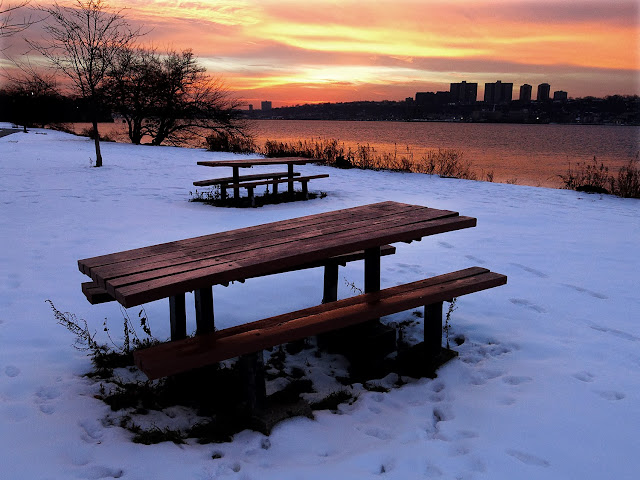 A day late, but this was an assignment to shoot "winter." I saw this on the way home today and it seemed apropos.

UPDATED: Fixed some of the blue color cast and a couple of other problems with the original posting that bothered me.
Posted by Michael Gatton at 7:11 PM 5 comments:

What's in YOUR Backpack? 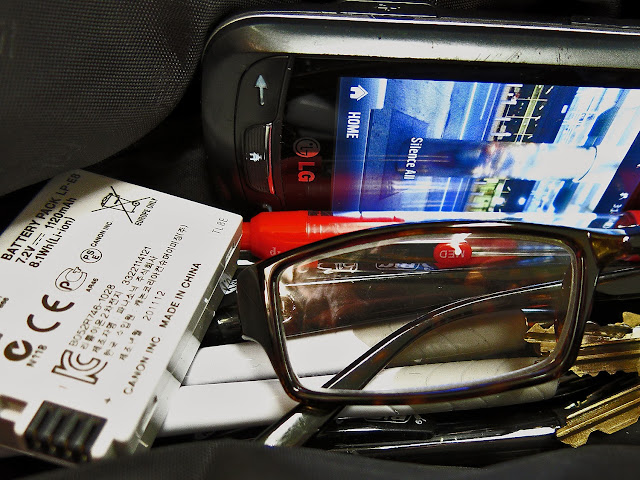 I confess that not all photo assignments inspire me equally. This one left me a little cold, but some of my students did a fine job with it.
Posted by Michael Gatton at 7:00 PM 1 comment: 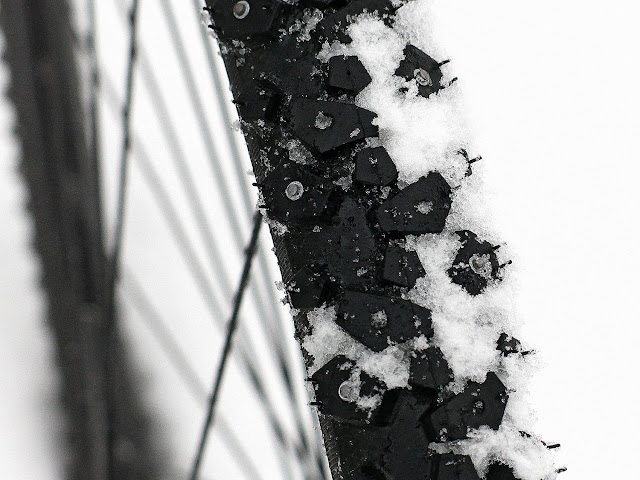 I decided I would not let a little snow or ice stop me from biking to work this winter, so I bought some snow tires and with some care they are doing well on ice and snow except for one exceedingly steep (but short) section of a hill on the bike path, which - owing to its steepness and the fact that it's a bike/pedestrian path - the city doesn't care about or bother to salt and sand - it's treacherous on foot or wheels.

Fresh snow today on top of ice today made it a little easier, actually.
Posted by Michael Gatton at 5:24 PM 2 comments: 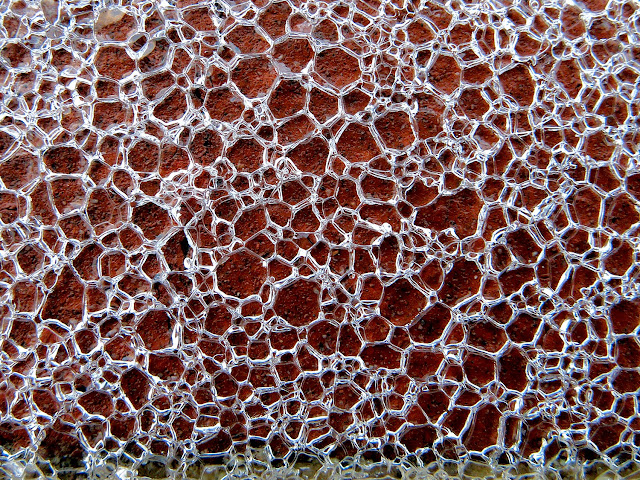 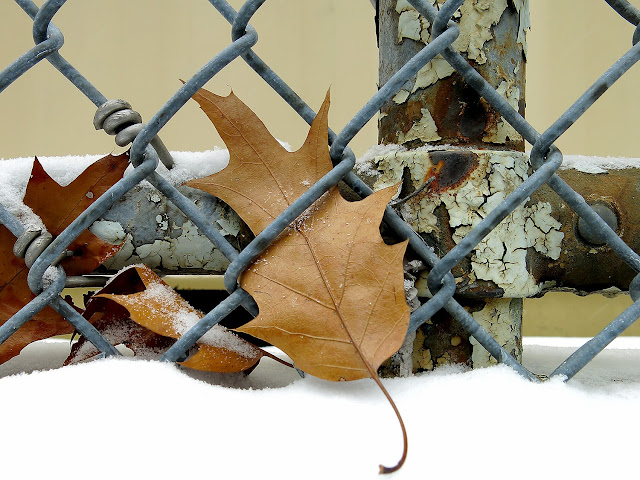 A little more snow in the city today, this time a few inches accumulated and still snowing at this point - and very cold.
Posted by Michael Gatton at 7:54 PM 2 comments: 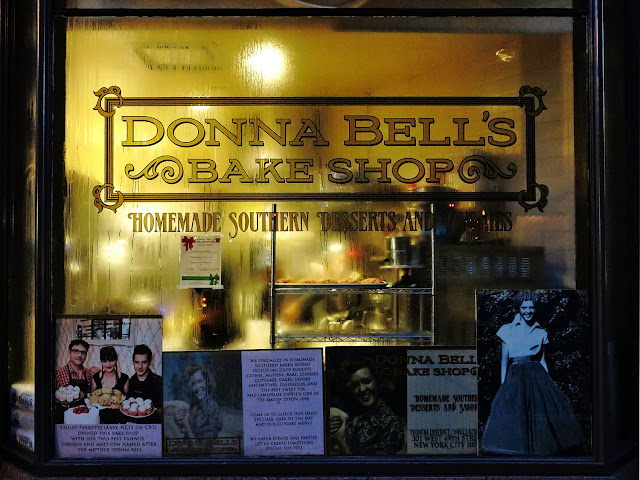 My photo club has gone from monthly assignments to weekly assignments with a goal of just getting kids to shoot more. The assignments are supposed to be focused enough that anyone can think of a suitable picture but open enough to allow for some variety. This week's assignment was "Breakfast" and I chose a bake/pastry shop that serves the kinds of sweets we associate with breakfast, shot in the early morning on a cold December day with a a lot of condensation on the windows distorting and obscuring the interior open kitchen visible from the sidewalk.
Posted by Michael Gatton at 4:23 PM 1 comment: 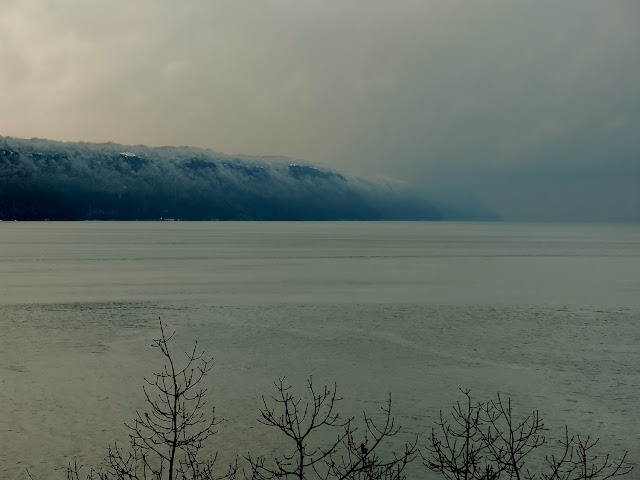 From yesterday, a little landscape. Looking up the Hudson River at the snow-covered tree tops along the Palisades disappearing in the fog. The color shift on the left is from the late afternoon sun finally peeking out way south of this point and coloring the clouds. You can see there's no snow on the trees this side of the hudson.
Posted by Michael Gatton at 8:41 PM 2 comments: 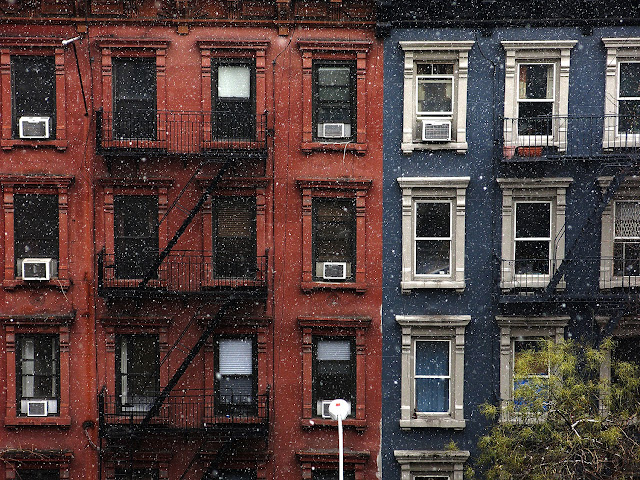 Once again click for the larger image to see the color and contrast as intended. From my replacement G15, so far no signs of sensor issues. but I'll shoot some clear skies tomorrow to be sure.
Posted by Michael Gatton at 5:45 PM 6 comments: 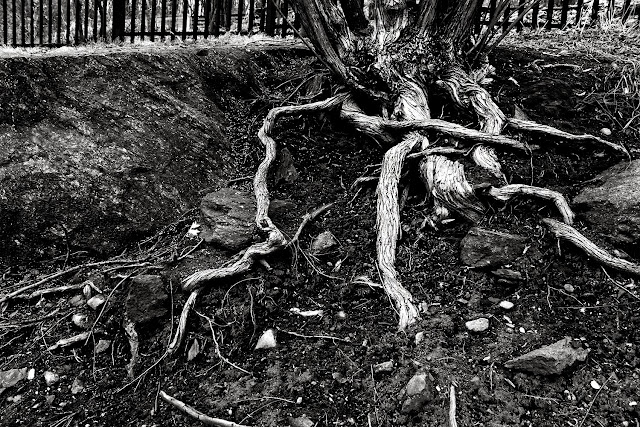 Sometimes blogger software softens up the contrast when I post here, but click on the picture for a larger version and it looks a little more like my original.
Posted by Michael Gatton at 9:01 PM 4 comments: 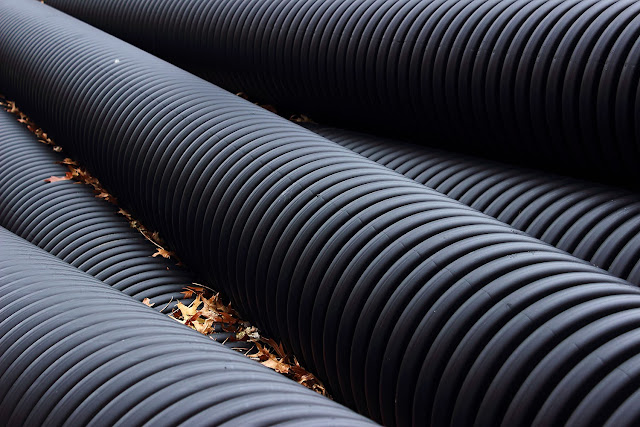 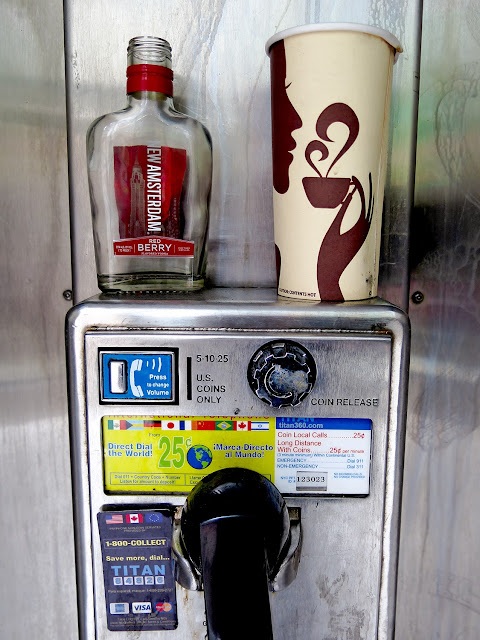 By coincidence today I saw a reference to this article on a science blog: 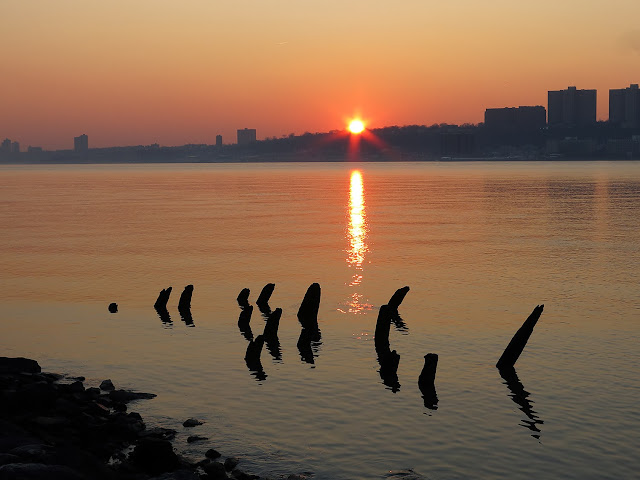 I noticed the dark splotch in the upper right hand corner in a shot from the weekend with a clear blue sky. At first I thought it was maybe just a puff of cloud or smoke that I hadn't noticed in the scene. Then today I took some shots with a lot of sky in them such as this one and the splotch is there again. It's subtle and you might think it's just a jpeg artifact or dust spot or something, or you might not even notice it if I didn't point it out, but it's unacceptable to me. I am returning the camera. It's a little more obvious in this shot oriented vertically, it's in the left top edge of the frame. 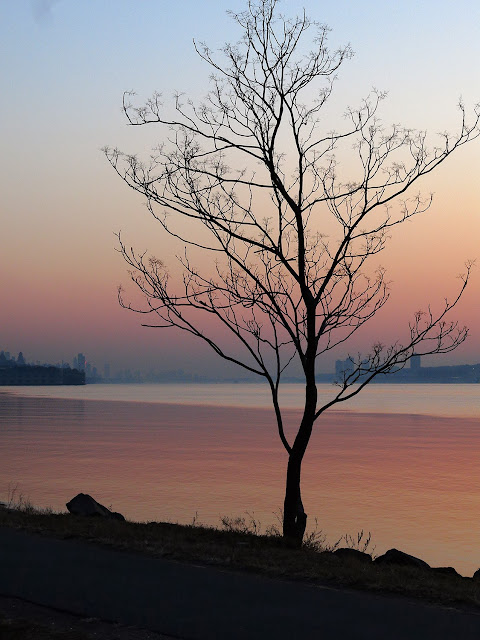 Oddly, it doesn't appear in every shot, so I don't know if it's the focal length or the angle of the light source or what. It should appear in this one (from a few days ago) but doesn't, while other similar shots have it: 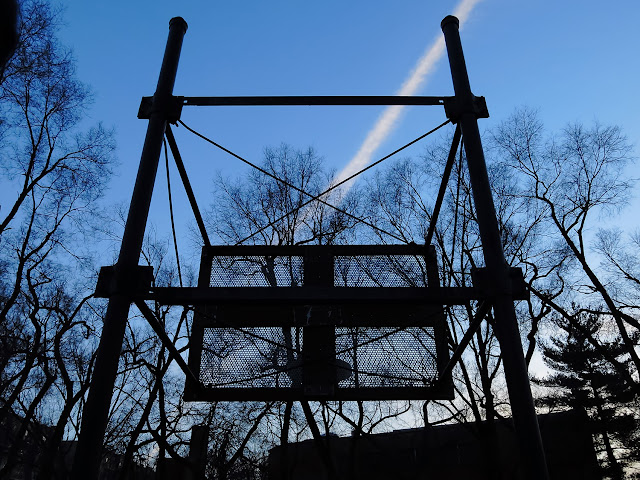 I bought this camera refurbished from canon direct. Don't know if that has anything to do with it, but I still intend to replace it with another G15. A new one. And then test it thoroughly. 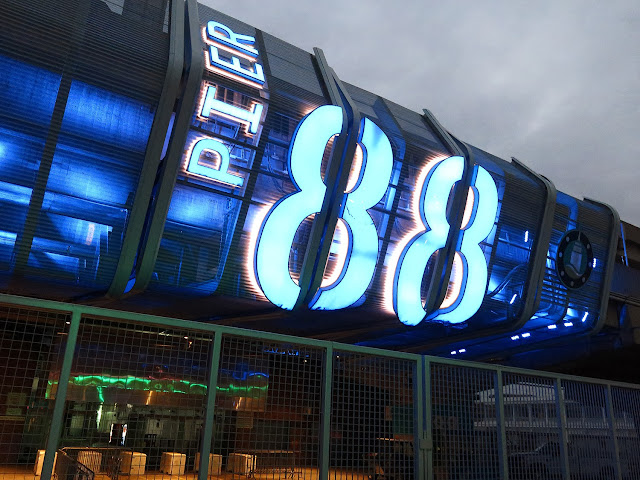 Part of my morning commute scenery along the bike path. Often there's a mammoth cruise ship docked at one or more of the piers.
Posted by Michael Gatton at 8:45 PM 6 comments: 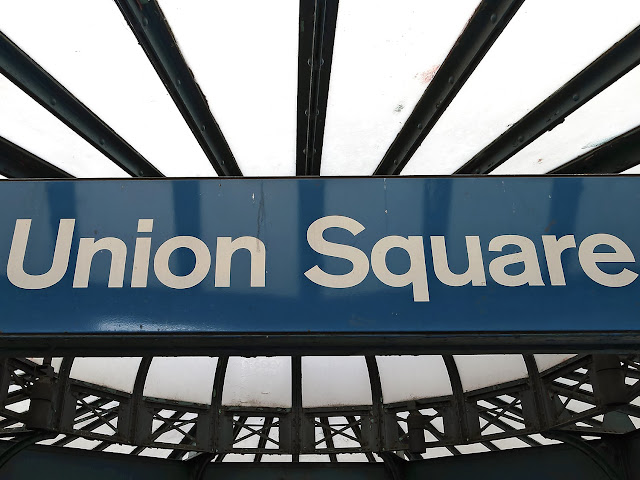 Just wandering around after buying memory cards at Adorama.
Posted by Michael Gatton at 6:50 PM 2 comments: