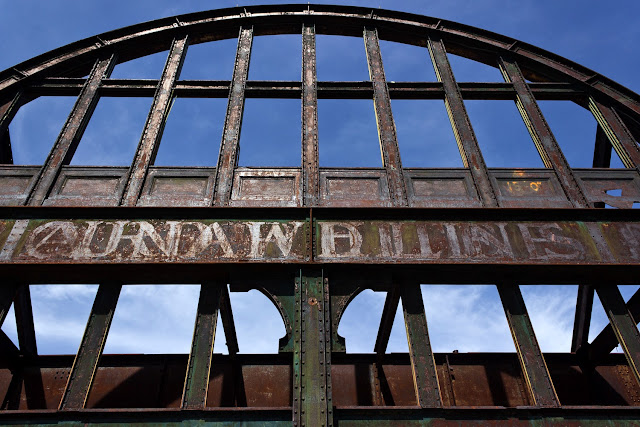 The indecipherable lettering reflects the changing corporate management of the pier mid-20th century. Read about it here. This is the pier from which the Lusitania launched its final voyage, and the Titanic survivors arrived here as well. 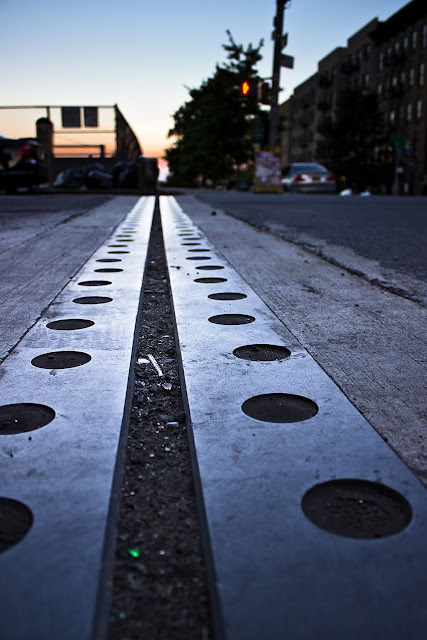 From my neighborhood wanderings.
Posted by Michael Gatton at 9:29 PM 1 comment: 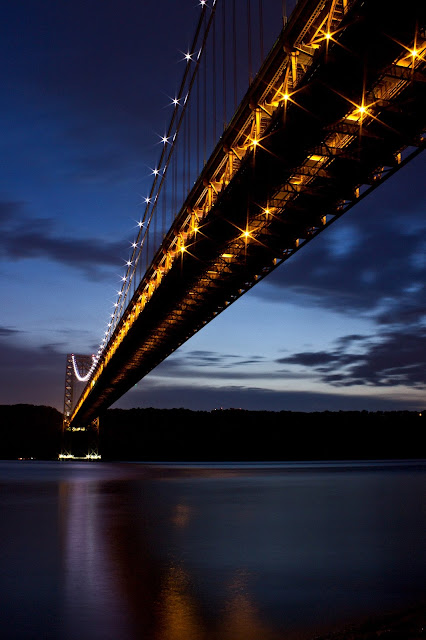 I'm pretty happy with this one - I mean, it's just a pretty picture of a bridge,  but I took a chance and went out late in the evening when it was getting dark and still raining and just hoped it would stop at the right time or my umbrella would keep the rain from blowing in onto my lens, and I lucked out.

This is on a tripod with 25 sec exposure. I had actually shot this scene the night before hand held (at higher ISO, faster shutter, and larger aperture), but the only one that came out sharp was badly composed with a slanted horizon too close to the bottom of the frame. So tonight I knew what I was looking for and when to go for it. Unfortunately I forgot the bug spray and got eaten up by mosquitoes or some such blood-sucking pest.

But, horizontal or vertical? 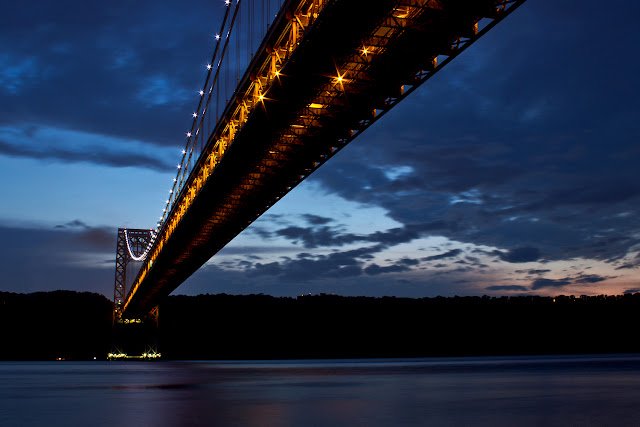 Cobblestone at the Cloisters 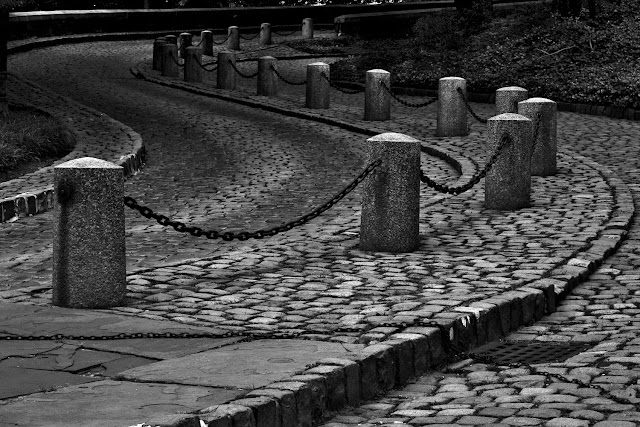 I've shot this driveway before in exaggerated high-contrast. This one is around sundown, on a tripod. I would like to shoot this  from a higher vantage point but there's nothing anywhere nearby to stand on. A lone human somewhere would be nice too.

A little rant. I was also chased off by security who barked "no photography allowed" at me. WTF?  I took a few steps back and set up my tripod on a public sidewalk and clicked away at the exterior of the building - shots that I knew were for nothing, I just wanted to see if the guard would confront me again, but he never reappeared.

Next day I called the museum. Photography is allowed inside the building, I was told, but not outside "for security reasons," like if I were planning a burglary or something. Seriously. I mean, security stopped me after I had very openly taken several shots on a tripod. I've been there dozens of times before in different parts of the exterior shooting pictures and no one has ever said anything to me.

There is no sign anywhere regarding photography, and no information on the museum website pertaining to exterior photography. If I were planning a robbery I would have had what I needed a long time ago. The place is surrounded by public sidewalks where I am free to shoot as much as I want and they have no say about it - it's the law in the US.

I don't mind the idea of security precautions, but the stupidity makes my head explode. 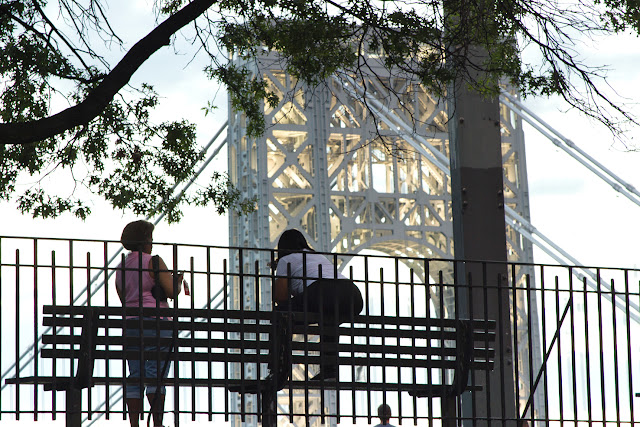 Sometimes it's the last-second, what-the-hell-why-not shot that you wind up liking. Of course in hindsight I should have taken a few more seconds to compose it a little better, but it will do for now. I was just reading something earlier this week about the importance of including people just to give a sense of scale, and this is a step. That random beam sticking up there is apparently some kind of extremely minimalist sculpture - not a flag pole or anything else of any discernible practical use. There is a bit of graffiti near the top that some intrepid soul applied - that's about 10-15 meters up: 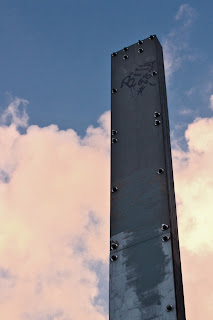 And yes, the sky and clouds really were that color (looking away from the bridge, where the sun was setting to the west). 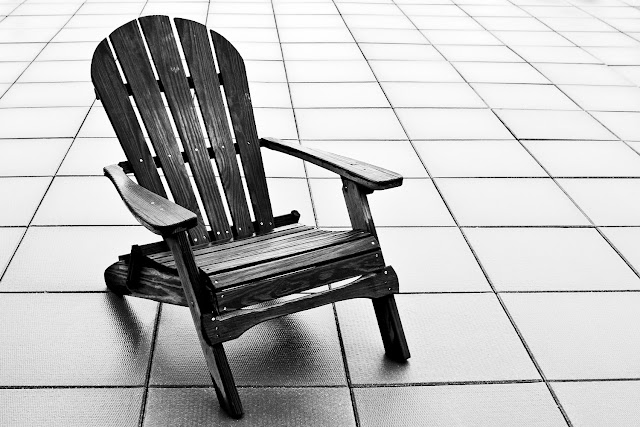 Photo Walk with a Student 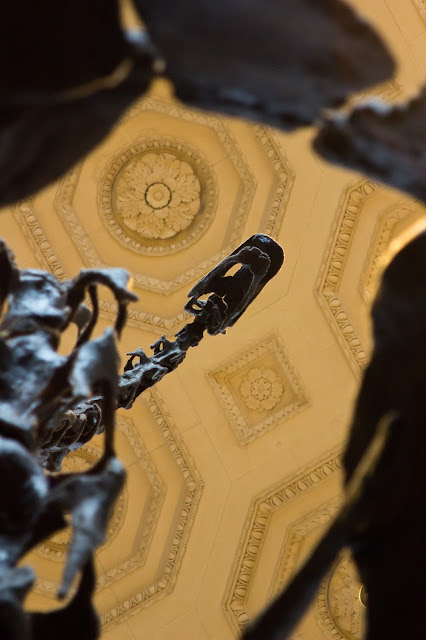 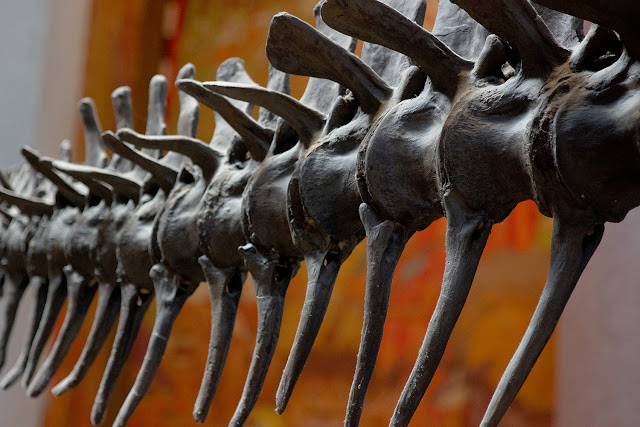 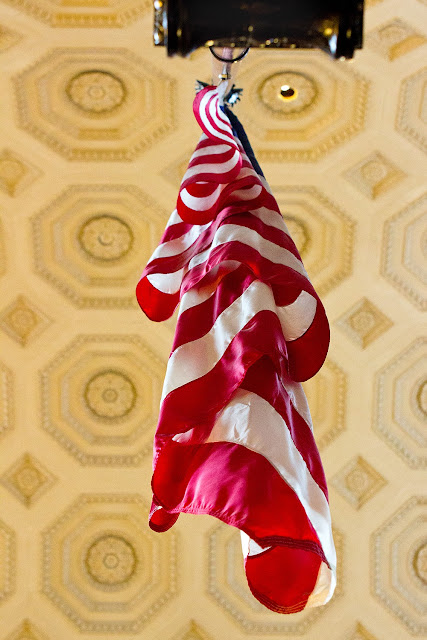 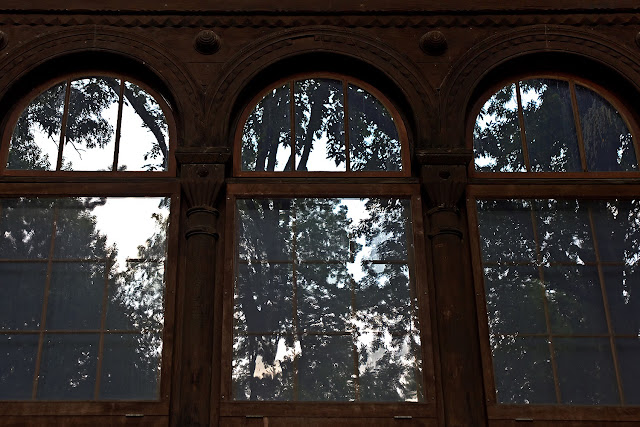 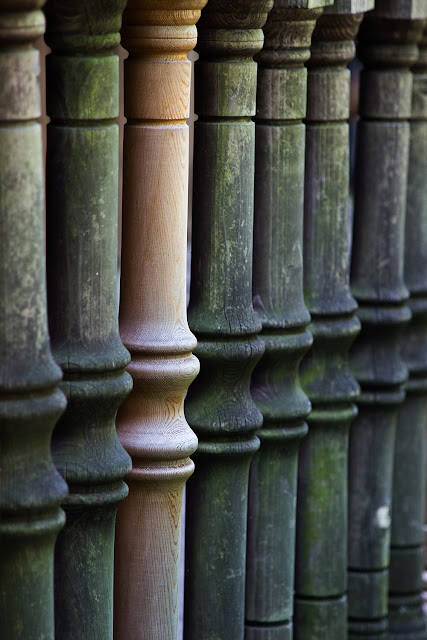 Teaching a student how to use my old Rebel SLR, so we met at the Museum of Natural History (first three) and then spent a few minutes outside in the sweltering heat at the Swedish Cottage in Central Park. These are a selection of my shots. 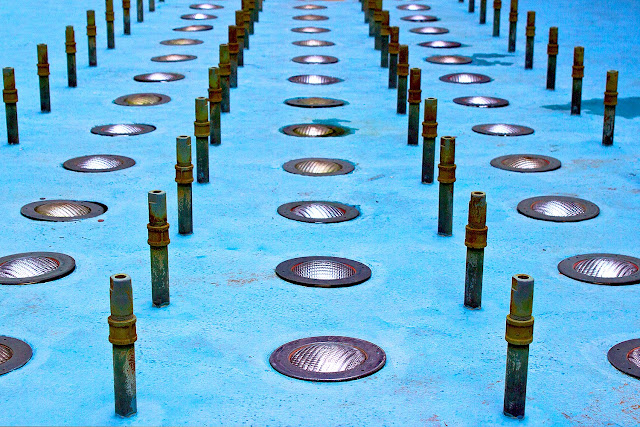 Not a bad metaphor for how I'm feeling, photographically. The heat spell doesn't help - you do not want to be outside at all with this kind of air quality, but that's just an excuse. I will keep chugging along....relief on Sunday/Monday.
Posted by Michael Gatton at 9:49 PM 1 comment: 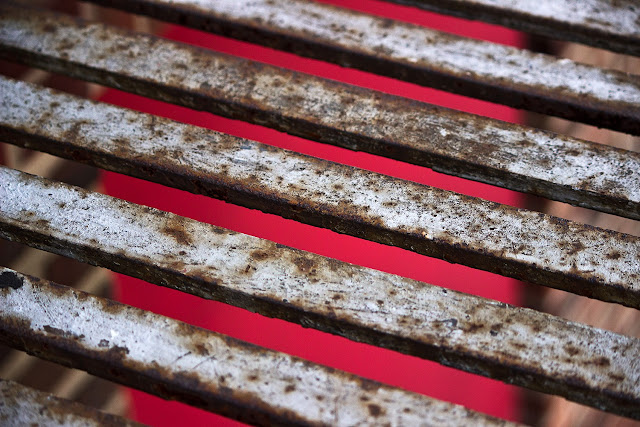 Hard to describe what this is exactly, but it's an exterior stairwell and this is the landing. There's another door above the red door that gives color to this image. It provides access to the water tank, and possibly other things, at the top of my building.
Posted by Michael Gatton at 8:54 PM 1 comment: 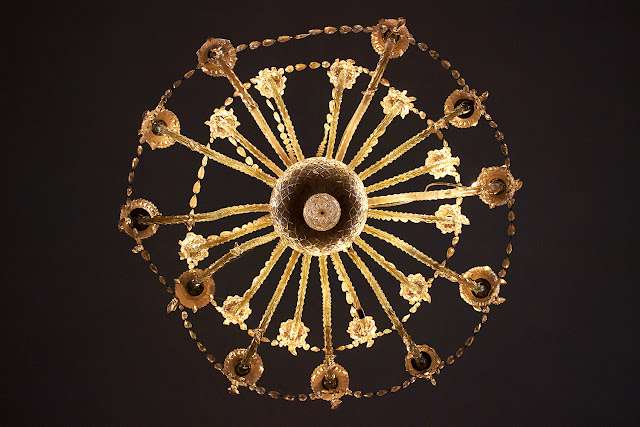 Inside a chapel of the Trinity Church at Wall Street & Broadway, Manhattan. Went on my first photo group walk. On the one hand I felt a lot less self-conscious about snapping pictures as part of a group, but was also more constricted in where I could venture if I wanted to stay with the group.

Weather wasn't great but it was a fun outing and I will probably sign up for another one soon.

Message in a Bottle 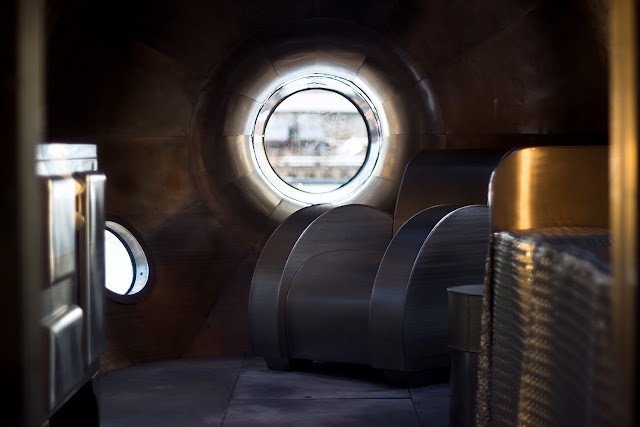 A little color today for a change. I've been going out with the intention of shooting b&w but this one just looks better in the subtle bronze and stainless steel tones. Interior of Private Passage by Malcolm Cochran, a giant bronze and zinc wine bottle made to look like the cabin of a luxury liner on the inside.
Posted by Michael Gatton at 3:13 PM 1 comment: 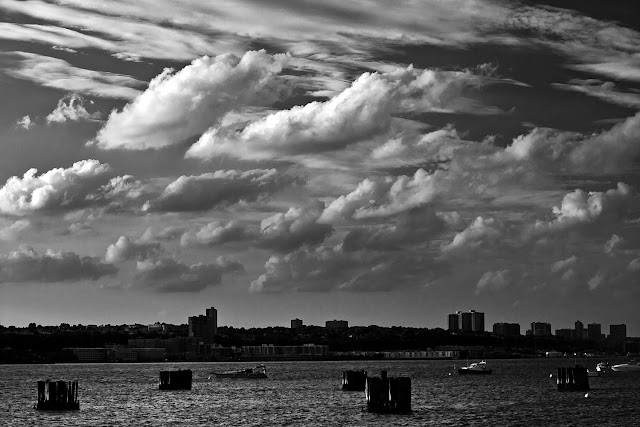 It's been like this for several days, terrible air quality as well. I guess we're paying for that relatively cool spring we had this year. I was playing around with a circular polarizer today, gave me a little bit more separation between the clouds and sky, still needed a good punch in software, though.

Roughly northern view across the Hudson into New Jersey. Take from approximately 86th street in Manhattan.
Posted by Michael Gatton at 3:09 PM No comments: 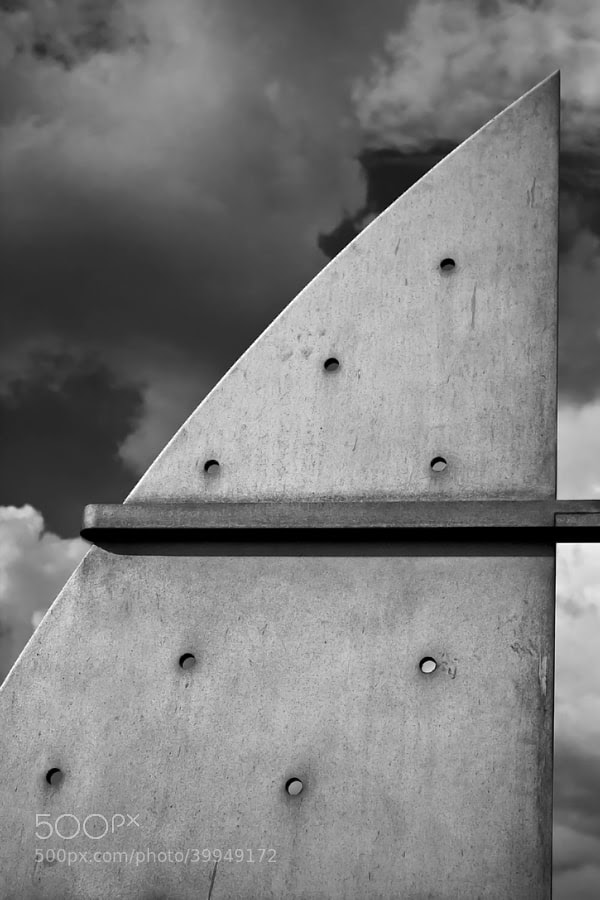 I'll leave this one as an abstract for the moment, will post a follow up tomorrow putting it in some context, but I think the context really shouldn't matter - it works or it doesn't on its own.
Posted by Michael Gatton at 6:46 PM 1 comment: 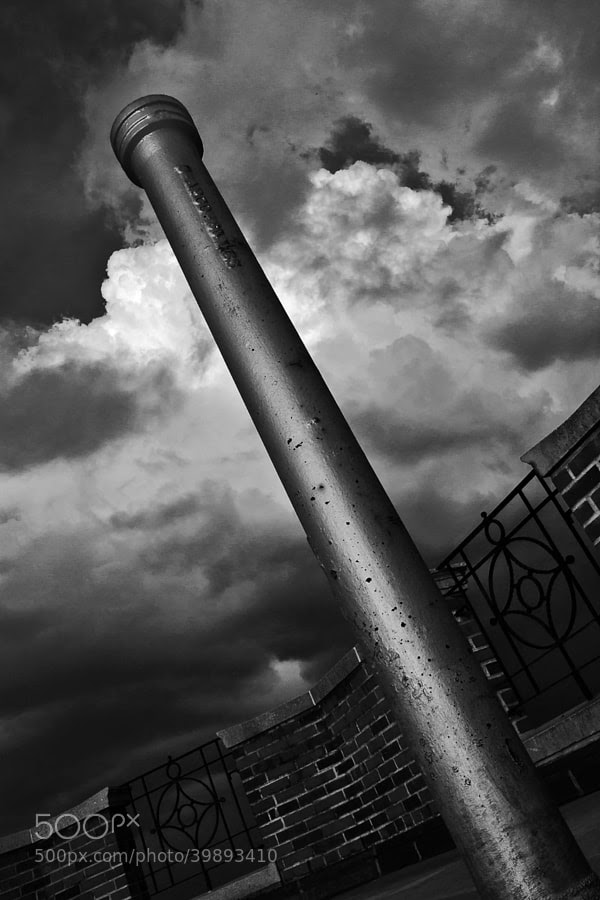 After a Long Hiatus...

I spent the spring semester pretty immersed in work. The few pictures I took were either school related (performances and proms and such) or stressed-out, rushed, half-hearted attempts at my usual stuff. So nothing good, really. With summer here I'm slowly working back into it.

I am also completely pissed at Flickr - their revamped interface is a total train wreck. So I am switching over to 500px, and reducing the number of pics I post. I will migrate a few of my older photos as well, perhaps a little updated. I won't delete anything from flickr, since I have so many images linked from there, but I won't be adding anything new or renewing my "pro" account. My school photography club will also continue with their free service.
Posted by Michael Gatton at 2:54 PM 2 comments: